After wallowing in a sideways consolidation for the past two years, gold is breaking out once again. The yellow metal blew through the $2,000/oz level earlier this month after consolidating between $1,700/oz and $1,800/oz since mid-2020.

While the gold market is volatile, major players on Wall Street have started to warm up to gold once again, with price targets from the likes of Goldman Sachs, JPMorgan, and Morgan Stanley now ratcheting up well above current levels, signaling that the institutional money is back on board.

There are many factors driving the rekindled enthusiasm, including inflation, geopolitical tension, and concerns about digital currencies as safe havens if war spreads beyond Ukraine and increasingly involves cyber-terrorism and attacks on global communications systems.

In that kind of world, bits are no better than pieces of paper.

That context forms the background for fresh interest in the miners, with junior miners once again back in the spotlight for speculators looking for high-beta gains in favored areas of the market.

One junior miner that has been on fire this year is Blue Lagoon Resources Inc (OTCMKTS:BLAGF, CSE:BLLG, FSE:7BL), a junior mining company with a focus on gold in British Columbia, Canada.

The company owns three properties: two gold-prospective, and one copper porphyry-type project. It has been drilling deep and striking gold over the past year, and much more drilling is planned for 2022.

Shares of Blue Lagoon have doubled in the past six weeks, but the stock still trades at just 50 cents per share.

The Pellaire Project is comprised of eighteen (18) claim blocks.  Each claim is wholly owned by one of the following three parties: four claims by Kristopher John Raffle (Owner# 276932) on behalf of ASIC Mining Inc., eight claims by Valor Resources Ltd. (“Valor”, Owner# 142767), and the remaining six claims by Zelon Chemicals Ltd. The 14 claims owned by Valor and Zelon are subject to an option agreement with ASIC Mining Inc. 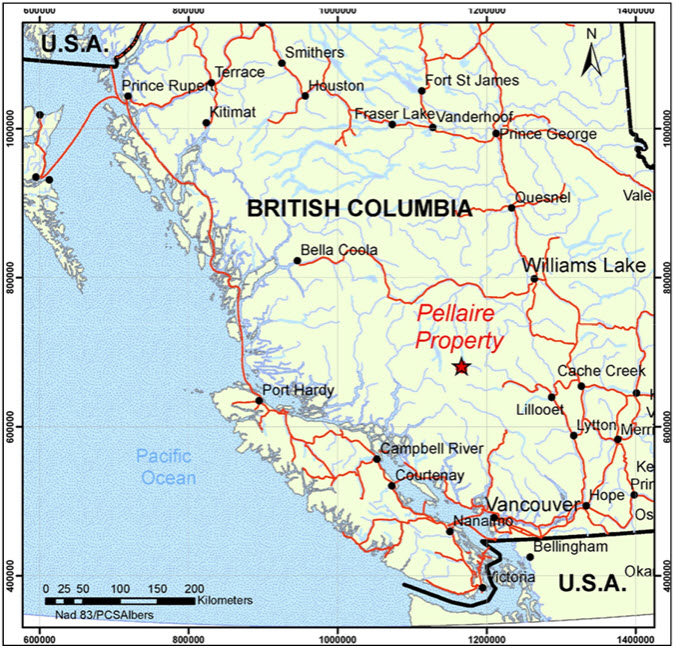 The company is on track to own 100% of the Pellaire gold property located 160 km southwest of William’s Lake in the Chilcotin range of south-central British Columbia. The Pellaire project covers over 4,400 hectares and is known to have 10 gold-bearing veins on the property.

The Dome Mountain Gold Project is an all-year road accessible project located a short 50-minute drive from Smithers B.C. The project holds both an Environmental Management Act Permit (EMA) and a Mining Permit providing for up to 75,000 tons production annually. In addition, the property has 15 known high grade gold veins with 90% of the nearly 19,000-hectare property yet to be explored.

The property includes the past producing mine on tenures consisting of 23 contiguous mining claims and one mining lease totaling 18,617 hectares, located approximately 66 kilometers east of the town of Smithers in northwest British Columbia. The Dome Mountain area has a long history of exploration that resulted in the discovery of numerous gold bearing quartz-carbonate veins. 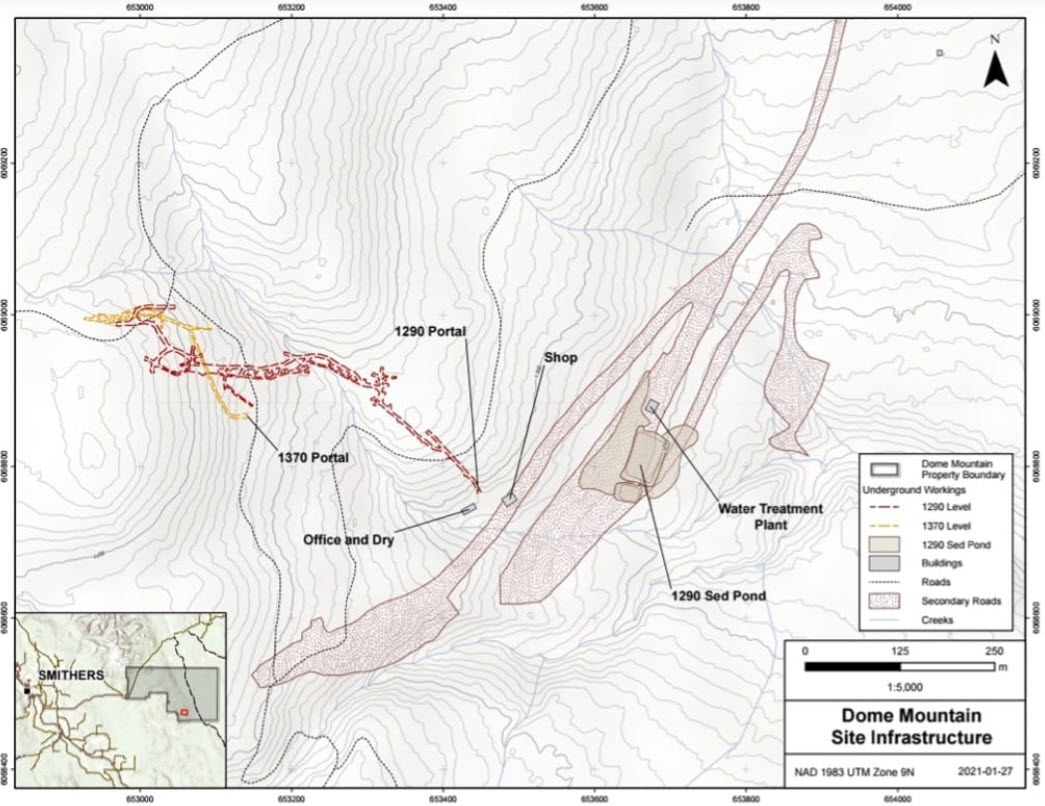 The Big Onion Project is located 16 kilometers east of the town of Smithers, B.C. and consists of 15 contiguous mineral claims comprising a total area of 4,810 hectares. Access to the Big Onion Project is an easy 20-minute drive from Smithers via well maintained gravel roads. A network of 4-wheel drive roads provide access to all sides of the claims and within the claim boundaries.

Copper occurrences were originally discovered on the property in the early 1900s. Between 1964 and 1998 various operators conducted diamond and percussion drilling, totaling over 134 holes (19,487 meters), on the property.  Eagle Peak Resources Inc. subsequently drilled a total of 84 holes (21,523 meters) to explore the depth and extent of the mineralized zones, conducted preliminary metallurgical test work, completed magnetic and induced polarization geophysical surveys, and calculated two resource estimates. To date, 313 drill holes totalling 45,477m have been drilled on the Big Onion Property with approximately $8.2 million spent on the project since 2006.

According to that release, results from Holes DM-21-188, DM-21-188A and DM-21-200 continue to show that the Chance Structural Zone contains multiple high grade gold bearing veins thus confirming it as a highly prospective target for aggressive follow up drilling in 2022. These holes intercepted sulfide-bearing quartz carbonate veins with strong alteration disseminated sulfide zones in the footwall.

“We are pleased to announce significant assay results once again for both gold and silver in new quartz carbonate veins drilled in the Chance Structural Zone. These sulfide-bearing veins are accompanied by intense alteration halos and bracketed by disseminated sulfide alteration which is unique to the Chance Structural Zone in the Dome Mountain Gold Project,” stated Bill Cronk, Chief Geologist for Blue Lagoon Resources. “Sheeted quartz carbonate veins with up to 30 veins per meter, intense carbonate alteration and significant base metal mineralization associated with high grade gold assays support the Alkali Gold Model,” he added.

Last month, the company announced that it has mobilized its crew and its first drill rig to commence its 2022 drill program, which is expected to be a minimum of 20,000 meters of diamond drilling on its all year-round, road accessible Dome Mountain Gold Project, located a short 50 minute drive from Smithers, British Columbia.

“The 2022 drilling at Dome Mountain will be a game changer for us,” said Bill Cronk, Chief Geologist of Blue Lagoon Resources.” We have drill targets that build on the newly defined mineralized zones at Chance and Federal as well as targets over the Freegold Intrusion. In addition, anomalous soils from the 2020 program have not been fully followed up and several new zones identified by soils in 2021 will provide new drill targets. Also, the Boulder Vein will be targeted for deep vein intercepts that is expected to add significantly to resource expansion there.”

“We knew we were in a good zone in the Chance Structural Corridor which has shown us multiple mineralized intercepts in previous holes,” said William Cronk, Chief Geologist for Blue Lagoon Resources. “We systematically worked our way south and then drilled south-southeast into the proposed eastern extension of the Boulder Vein in anticipation of mineralization at the intersection of two strong lineaments; the Chance Structural Zone and the eastern extension of the Boulder Vein. Previously reported intercepts were high grade in this area and the expectation is that we will be able to follow this intercept with near term holes which will test for further high-grade mineralization at depth and along strike.”

The company recently followed that up with key news that the Company’s toll milling partner, Nicola Mining (“Nicola”), is now ready to send the fourth shipment of concentrate made from the mineralized material from the Dome Mountain underground mine. The shipment of 103 dry tonnes of gold and silver concentrate grading approximately 90 g/t Au and 477 g/t Ag will be sent to Ocean Partners UK Limited, a leading European based commodities trading company with offices in six countries around the world. All concentrate assays were completed at Base Met Labs, an accredited metallurgical testing facility located in Kamloops, BC.

“So far three shipments totalling 223 dry metric tonnes of concentrate that were shipped last year have a value to the Company of more than CDN $1 million, with some funds received and more to be received in the coming weeks,” said Rana Vig, President and CEO of Blue Lagoon Resources. “This fourth shipment of concentrate is valued at more than $500,000, and once received, will give a boost to an already healthy treasury with no debt, ensuring the Company has a significant runway to execute on its aggressive exploration plans on a project that’s been relatively unexplored and under the radar.”

Blue Lagoon shares have been on fire over the past couple months, ripping as much as 100% higher since late January. That move includes a break above the 50-day and 200-day key trend moving averages on increasing volume.

The float rings in at under 100 million shares, providing a productive capital structure for new money flows. And the stock has outperformed major gold miner indices and ETFs over the past year, and especially over the past two months – when we have seen gold stocks in a new spotlight as the metal tests new all-time highs.

The trend higher appears sturdy, with the Average Directional Index scoring above 40, indicating strong momentum under the surface. 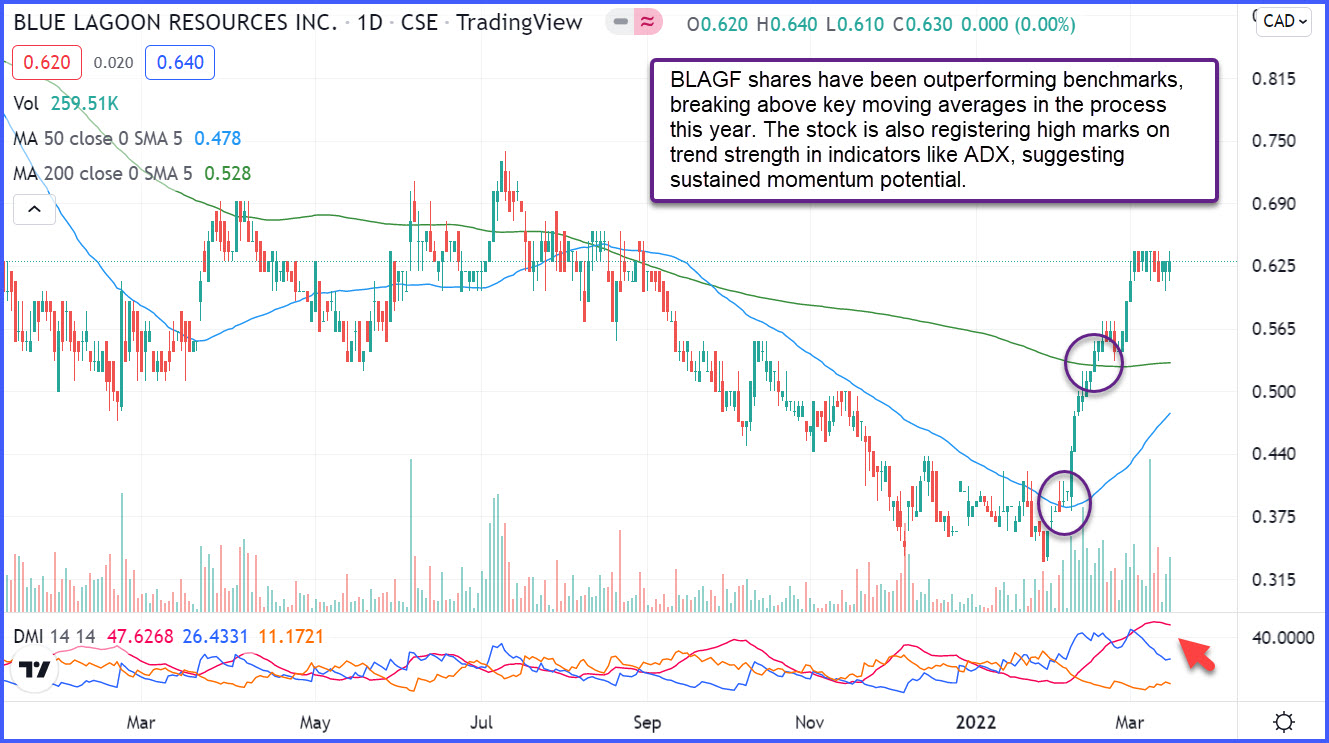 When the gold market comes into favor, the big gains are generally found in the Junior Mining space. But that space is notoriously filled with cash-burning over-leveraged money pits that flame out and take investors down with them when the tide turns.

Blue Lagoon Resources has put together a business model and vision that deserves attention because the company has managed to pair an operational funding model that sidesteps dilution risk with the speculative upside potential of a true scalable junior mining name with real physical prospects already in place.

Shares of the stock are flashing promising signals as well at present, outperforming both the large-cap and small-cap metals mining ETFs during a period when those bets have been paying off and receiving attention from Wall Street and the financial media.

Both the Geopolitical and Inflationary tailwinds that have historically powered interest in gold are in full swing right now with the Fed well behind the curve and Vladimir Putin continuing to mount the first major land war in Europe in decades. That foundation should continue to put gold and gold miners in the spotlight. And BLAGF could be a uniquely well-positioned high-beta asset to consider in that context.

Some of the most active stocks to look out for are DIDI Global Inc (NYSE:DIDI), Zhihu Inc (NYSE:ZH), Redbox Entertainment Inc (NASDAQ:RDBX), StoneCo Ltd (NASDAQ:STNE)

Los Angeles man exposes himself on train, passenger who calls to report it turned away
admin - December 3, 2022